Right Back Where We Started From 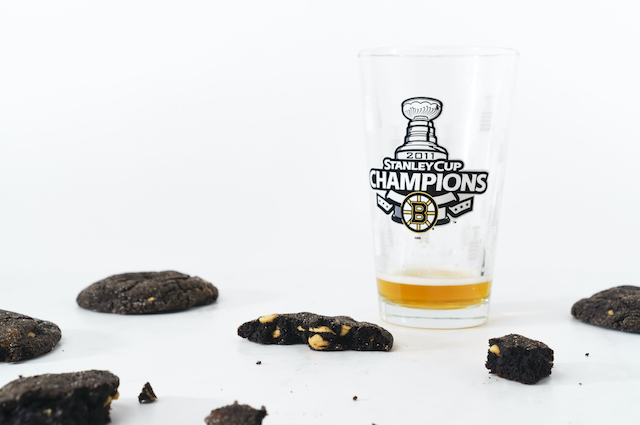 With the Bruins embarking on the playoffs tonight, I thought it made sense to share the story behind a cookie superstition that led to a dream summer and eventually Boston's Craft Cookie Company.

About 10 years ago, I brought a new cookie into The Fours Boston for an early morning game for the Bruins playing in Prague. The season prior there a had been some joking from the Fours staff that the Bruins always seemed to win when I brought them cookies. I had been working all summer on my first cookie recipe. My cousin had given me this black cocoa ( think Oreos) and I knew I wanted to make a black cookie with it, but it needed a gold component. I settled on peanut butter chips after several tries of edible glitter (which would get lost) and the peanut butter chips reminded me of the older brown jerseys the Bruins wore a very long time ago)

So, I packed up my cookies and went to have breakfast at the Fours. The cookies were met with instant praise. Throughout the season, I continued to tweak the cookie recipe to see what happened when I would try less this or more of that.

That year was tough for me professionally. I didn’t like my job anymore and that was hard. I’d been there since they were a cool start up downtown, just steps from my North End apartment. Now, I lived in Quincy, I was married and had a car that I had bought just to drive to Burlington to work for the large corporation that had acquired my small start up. My job was killing me. I was working long hours and I hated it, I was driving right through the city that I thought would be my home and work forever. My life didn’t seem quite right. It was hard.

So, this cookie was kind of my happy place. Making it was fun. I would just fire up the KitchenAid and I would throw on some music.

During the playoffs that year, I said to my friend out of frustration “I wish I could just make cookies for a living” and to my surprise he said “Do it” If you knew (or know) my best friend Jon – he is analytical as all get out. He’s no risk taker. I probably told him so he would just talk me out of it. When he didn’t, I started to tell more people that I wanted to do this.

Eventually the Bruins won the Stanley Cup that summer and it was awesome. I remember in many of our celebrations my friend Joe decided that we should name my imaginary cookie business “Top Shelf Cookies” He was referring to a radio bit o 98.5 The Sports Hub on the Toucher & Rich show. If you are a Bruins fan, you know what I’m talking about it.

But something changed, it had a name. It was no longer a pie in the sky idea. It was a name of a business.

A lot happened between June 2011 and September 2014. The short version is: I bet $2,500 on myself to get this started and promised myself if when that cash was gone and this didn’t seem viable that I would find a cube somewhere and just be grateful to have a job.

On September 8, 2014 we did our first event with the public at CommonWealth Kitchen and people who were not my friends LOVED the Black & Gold cookie. I won’t say I never looked back, because that’s a lie. This job has no vacation days, it has no benefits, when I’m sick sometimes I gotta push through. I missed my sister’s baby shower because I had the largest order in our company history and we were behind and I’m still sick over it. It’s likely not the last important event I’ll miss, but I still feel terrible and it’s been a year and a half.

We make a lot of cookies now (over 50 varieties in the last six years) and what we always get asked is “what’s your favorite?” I always enjoy our newest creations, and I’ll usually try to answer with that – because it’s what I’m most excited about at the time. But, the Black & Gold, it changed my whole life. I am back to living and working in the city that I love. I create cookies, which is a blast. I get to collaborate and work on cool projects. I’ve sold cookies in the shadow of the Green Monster, I’ve made cookies for Boston Marathon finishers, I fill peanut butter cookies with fluff because that feels like home to me.

Thank you to all our supporters old and new for everything. Buying our cookies, giving them as gifts, telling people about them, likes, double taps, retweets, shares, posts – it all means the world to me. I just set out to make really tasty cookies and I think we do that.

So, as we embark on playoff